Dexcom vibrated on the nightstand and I ignored it. I heard it, but I ignored it. It vibrated again, but this time was accompanied by the ear-splitting “beep” alarm. Instinctively I threw out my arm and dragged the glowing receiver in front of my face. It said I was high, reading me at 184 and the time registered as 4:15 am. I rolled over onto my back, holding the receiver on my chest and allowed my eyes to droop closed again and the screen’s glow lit up the entire bedroom.

“Are you going to handle that,” mumbled Brad, causing me to open my eyes again. I didn’t want to get it, I just wanted to go back to sleep. I reluctantly pricked my finger and tested while my husband stumbled to the bathroom.

“What was it?” Brad asked when he climbed back into bed. 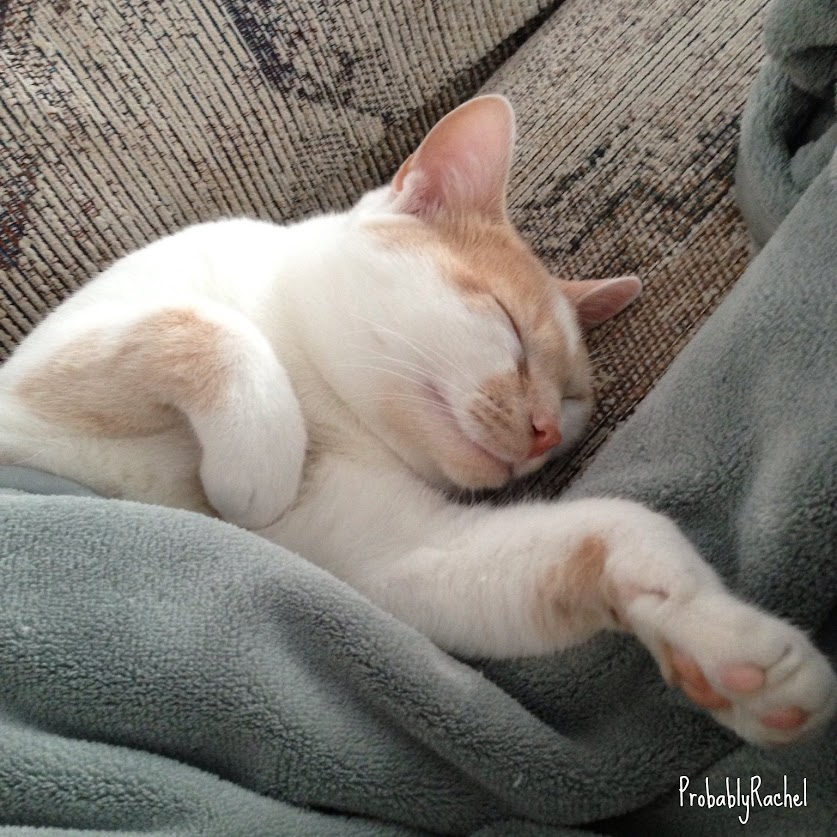 The longer I live with diabetes, the less annoying the various aspects of self-care become. I’m pretty sure that I will never stop being annoyed with the sleep interruptions though. END_OF_DOCUMENT_TOKEN_TO_BE_REPLACED

Last night this was happening on the couch beside me:

I wondered how that was could even seem like a comfortable sleeping position until I realized that for three nights, I was sleeping like that! Between the OmniPod on my right arm and the Dexcom on my left leg, this typical side sleeper couldn’t comfortably lay how she wanted to. I’m pretty sure that I spent more of those three nights looking just as twisted as my little Watson.

On another note, I have become a crazy cat lady.

Because I can’t take them all home

Posted in My Life

I can’t say that we enjoy our time with you and 2 a.m. last night. We would rather sleep with you instead.

In a groggy haze, I woke up to my husband frantically shaking me around 2 a.m. Everything was quiet, but Brad was furiously shaking me. Then my hearing returned and I heard, “Rachel, wake up. Hey, wake up. Your Dexcom is going off.”

I leave my Dexcom on vibrate, face up on the night stand while we sleep so that it wakes me but not Brad. In the past, I always heard the vibrating and woke up to the light.

But not last night.

I snagged the receiver from my nightstand and saw a reading in the 220s. I can’t be high, I thought, remembering that before bed my blood sugar was 91 and I ate 4 dark chocolate covered blueberries to boost it a little before going to sleep. I tested and sure enough I came in at 234. I took insulin and looked at my graph, I wasn’t just high, I was holding high with a line showing 2ish hours over 180. I said to Brad, “Thanks for waking me, I’ve been high for awhile.”

“I know,” he responded then pulled the covers up over his head and promptly went back to sleep. I reluctantly set an alarm for 4 a.m. and laid back down. At 4 a.m. I hit snooze on my alarm and laid there in a haze trying to figure out why I was awake. At 4:15 it dawned on me, I need to test. I tested and came up with a result of 197. I let my PDM calculate a bolus and checked to see how much insulin was still active and I took the whole recommended bolus. I drifted off to sleep around 4:45 and reluctantly crawled out of bed at 6:30 this morning.

Not a pleasant graph

END_OF_DOCUMENT_TOKEN_TO_BE_REPLACED

[S]leep is the golden chain that ties health and our bodies together.

When I say that I had a “rough night,” I usually mean something very different than many of my peers (that includes both the “partied too hard and have a hangover” crowd and the “baby didn’t sleep so parents didn’t sleep” crowd). I’ve been up a lot at night with my diabetes.

Last night it was multiple low alarms on my Dexcom and depleting my bedside glucose tablet supply.

Other nights, it’s been slowly battling my numbers with insulin in the fall out of a bad infusion site. Setting an alarm for every two hours to test and take more insulin is less than fun, but the last thing I wanted to do was let the numbers do whatever they wanted and end of sick.

Then some nights, it’s because I wear a medical device and it woke me up when I rolled onto it. Sleeping with an OmniPod under your back is much like laying on a rock.

When I was a teenager, I used to have serious sleeping problems. I was awake for 48 hours straight at one point in my senior year because I couldn’t turn off my brain and sleep. College was not conducive to positive sleeping habits, so when I’d graduated and settled into married life, I started sleeping better.

Now diabetes is getting in the way of a good night’s sleep. When I don’t sleep well, my body gets stressed and my diabetes responds… and my Dexcom buzzes more. It’s a vicious cycle.

I would dream of sleeping soundly if I could.

Oh to be able to sleep that easily!