Bursting into a basement lake

I’m taking a break from D-Blog Week (possibly rounding out my participation since I don’t normally blog on the weekends) to talk about an adventure in home ownership.

One of the things that we loved about this house when we put our offer on it more than a year ago was that it was updated within the previous 5 years (new furnace, air conditioning, new water heater) and had current code wiring, which isn’t that common in houses built when ours was.

On Mother’s Day, about two minutes into my morning shower it felt like the hot water had dropped off so I turned the cold off completely and took a luke-warm shower. Brad hopped in the shower after me and scolded me for using up all of the hot water. When I told him I’d had barely any for mine, he went downstairs to check on the water heater. 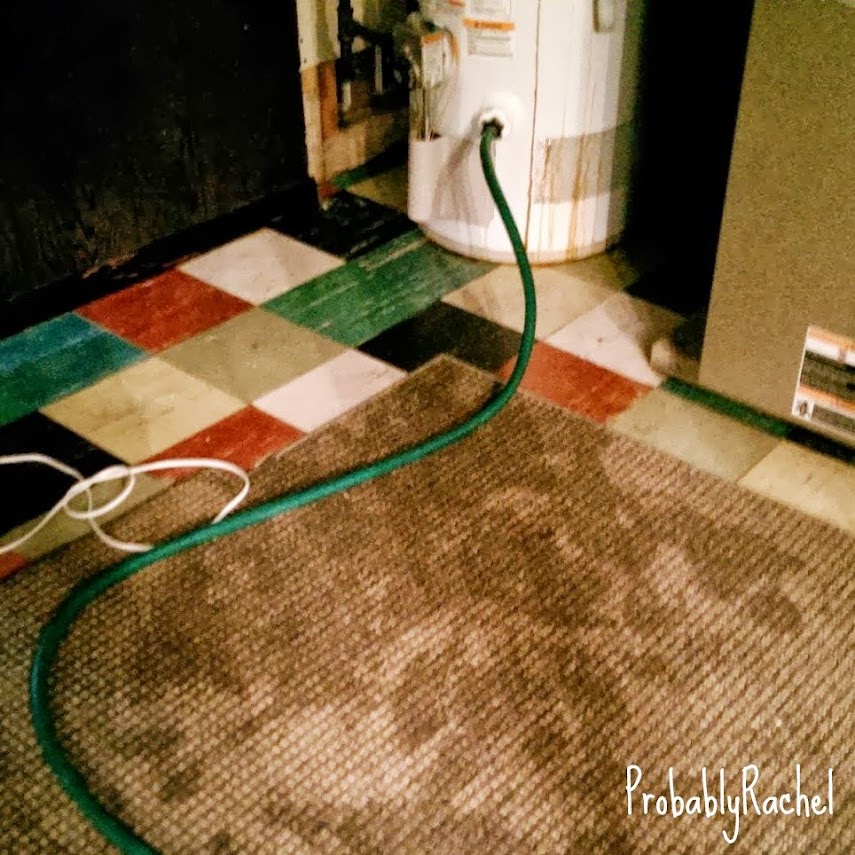 Draining the tank after some drying had occurred.

What he found was the beginning of a new Great Lake forming in our basement. Our GE water heater, manufacture date of 12/2011, had burst. We could still hear water running into the tank when he shut off the valve to the heater. So Brad shut off water to our whole house. We spent the rest of the morning with a garden hose running from the heater to the utility sink to drain, mopping up the water (that thankfully hadn’t damaged anything) in the basement, Brad called the company then called a plumber.

We decided to put off repairs until the next day, got in the car and went to visit our moms for Mother’s Day. We brought back my mother-in-law’s “Green Monster” carpet scrubber and sucked as much water out of the basement carpet as humanly possible, set the dehumidifiers and fans on it before going to bed late. (Somewhere in our evening process, Brad tried readjusting the tank shut-off valve and it broke completely off.) 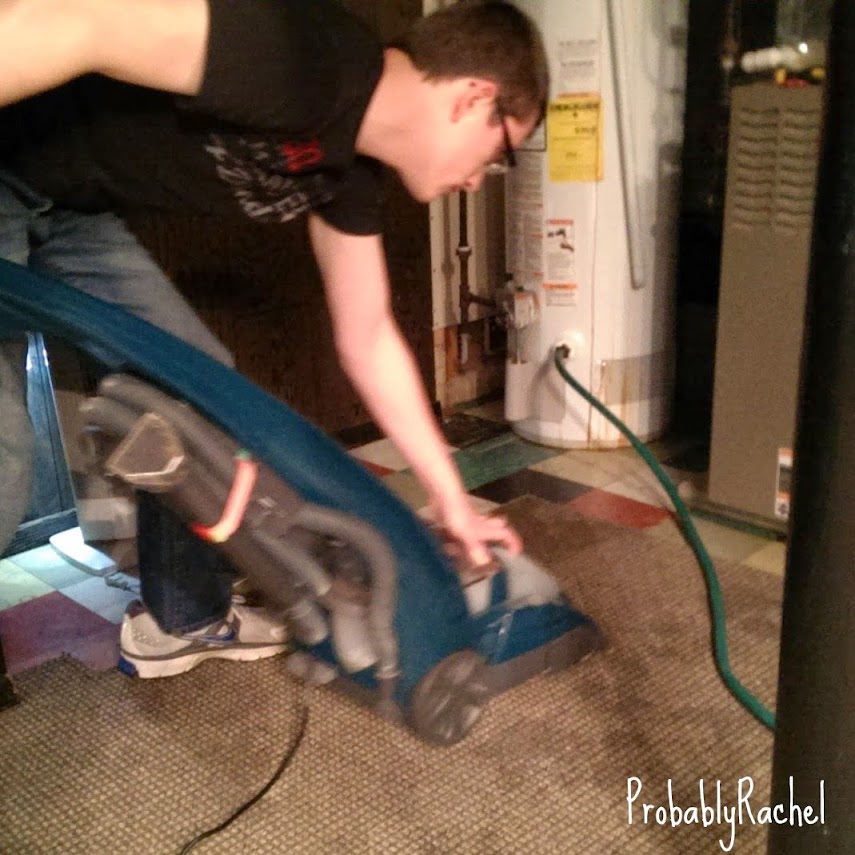 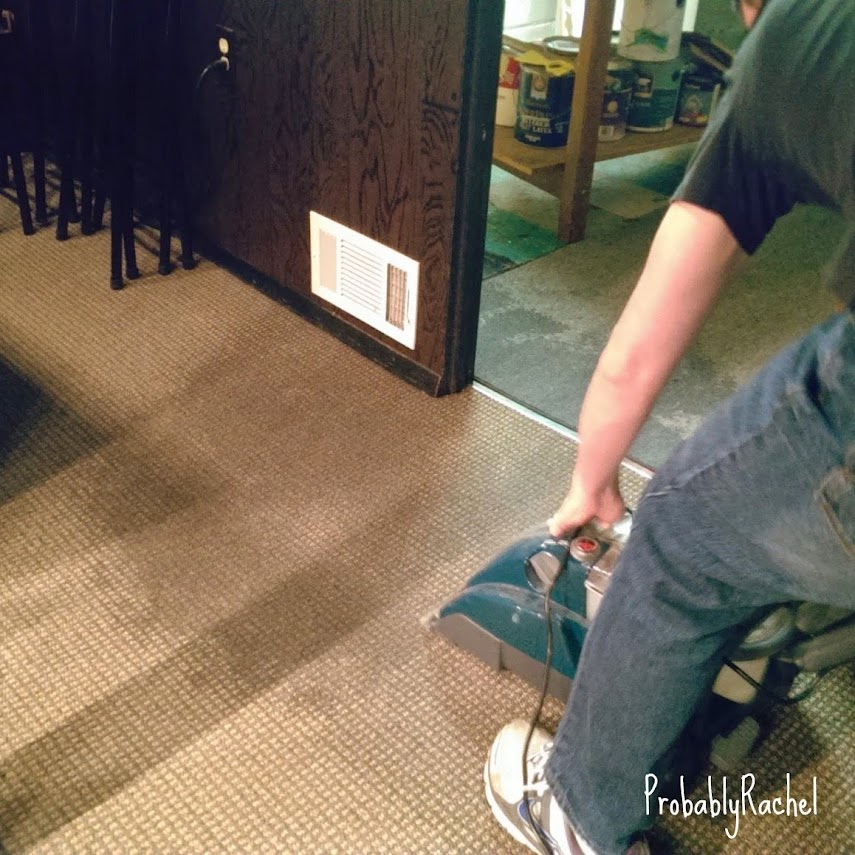 On Monday, we both worked at home and had a plumber in the basement most of the day. Since buying this house, we’ve worked with two different plumbing providers that had provided good service. The first company couldn’t even answer their calls, the second was our local Roto-Rooter company. We had someone assess the situation about an hour after the call. He was straightforward about the quality of the model the previous owner had installed himself from Home Depot and about what it would cost for a replacement through them. It turned out to be a better situation for Brad to go purchase our new Rheem (recommended) water heater and call the plumber back to install it. 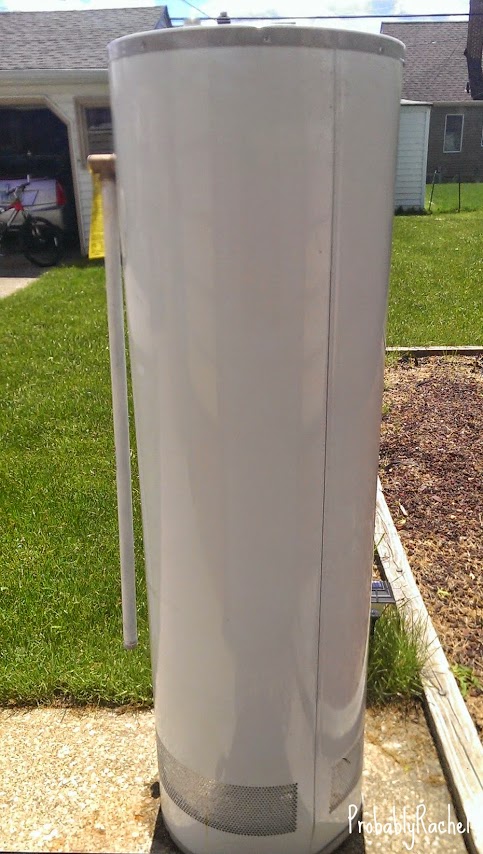 The old tank, leaving rust stains on the back step

In all fairness, when Brad called GE they said that we could take the failed water heater back to Home Depot and get a replacement for free. Research showed that we could expect another failure in anywhere from 1-2 years. 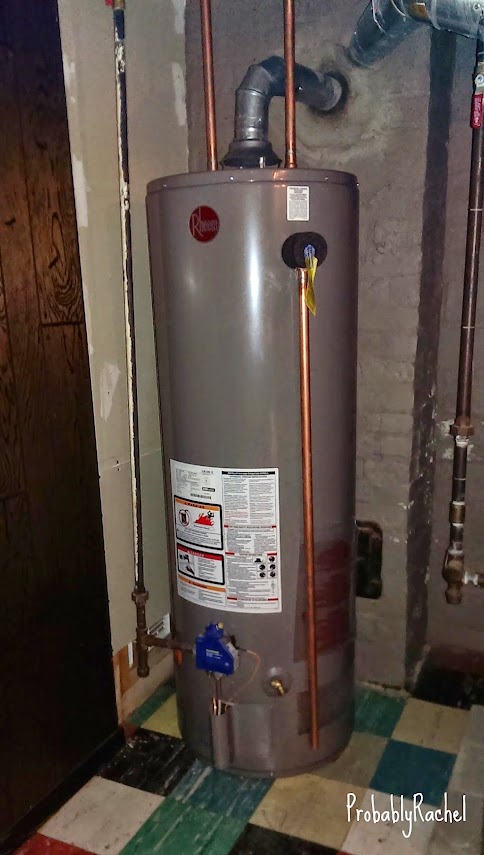 Side note: I find it slightly amusing that I watermarked pictures of water heater failure…

Prepare for a trip

Please take off your shoes